This Korean spicy radish salad is an easy side dish (banchan) to put together. It can be a quick substitute for kimchi and is great in bibimbap. 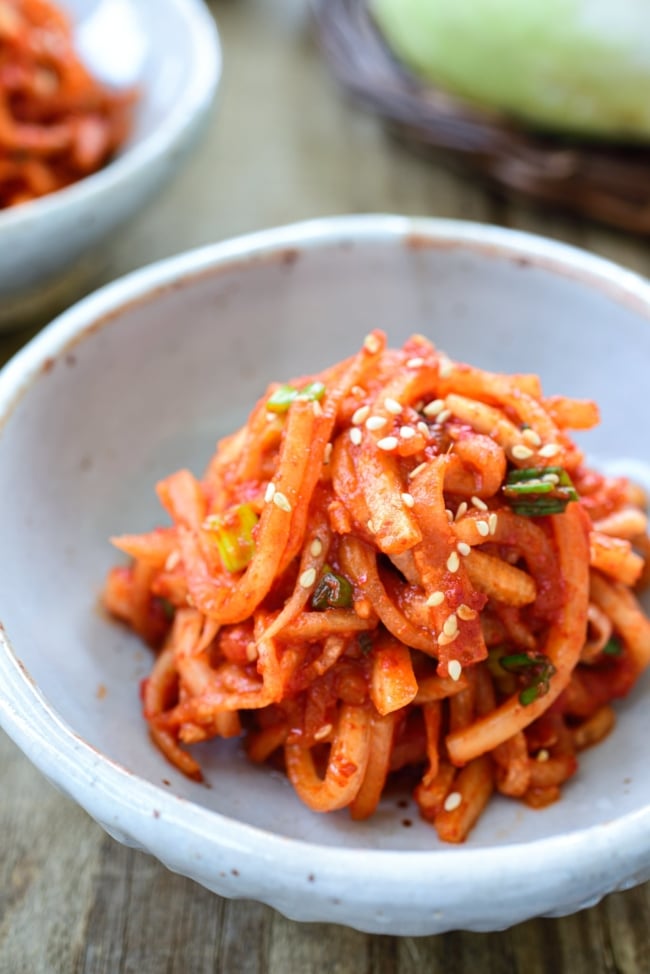 Its that time of year again! Korean radish, mu (or moo), is in season! Ive posted several radish dishes before, such as kkakdugi(cubed radish kimchi),dongchimi(radish water kimchi),muguk(radish soup), andmunamul (stir-fried and steamed radish). Here, I made a popular side dish called musaengchae ().

In late fall, Korean radishes taste really sweet, juicy, and crunchy. Korean radish is a variety of white radish, which has firm crisp flesh and a slightly sweet and peppery taste. Its similar to daikon, a Japanese variety, but quite different in texture and taste. However, you can use daikon if Korean radish is not available in your area.

Saengchae is a general term for salad-like dishes made with uncooked vegetables. Musaengchae is made with a radish. There are several variations, such as non-spicy, sweet and sour radish salad. This spicy version is a more common variation.

This one has the flavor of fresh kimchi (not fermented), so it can also be a quick substitute for kimchi. Its great in bibimbap as well. Its also a classic dish thats served with bossam (boiled pork wrapped in salted napa cabbage).

Musaengchae is an easy side dish to put together. The most difficult part for some of you will be julienning the radish. You can use a mandolin if you like. For this type of musaengchae, I like to salt the radish first to draw out some water for extra crunch.

In this recipe, I used 1 tablespoon of fish sauce (myulchi aekjeot), but sometimes I also use salted shrimp (saeujeot). You can of course omit the fish sauce and use the same amount of soup soy sauce (gukganjang) or simply a little more salt to season to make it a vegan dish. 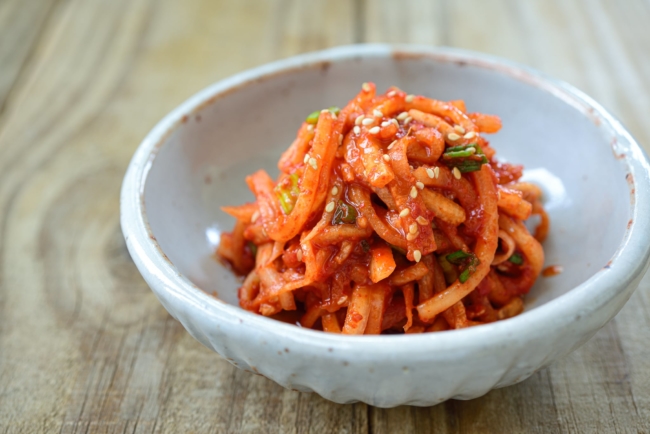 Have you tried this Korean spicy radish salad recipe? Please rate the recipe below and leave a comment! Stay in touch by following me on YouTube,Pinterest,Twitter,Facebook, andInstagram. 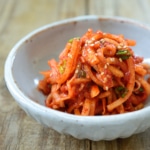 Korean Spicy radish side dish (banchan) great in bibimbap and as a kimchi substitute!

This recipe was originally posted in November 2012. Ive updated it here with new photos, more information and minor changes to the recipe.